This is another international soda reviewed by request. I’m doing a string of these requests, so brace yourself for more. L&P isn’t particularly exotic, but it’s very difficult to find outside of New Zealand. This probably explains the slogan “World Famous in New Zealand”. It’s called L&P because of the lemon flavor and the town where it was originally produced (Paeroa). The mineral properties of the water in Paeroa gave the drink a unique taste which the current owner (Coca-Cola) tries to maintain.

I’d like to do something slightly out of the ordinary. To best explain the L&P brand I’d like to direct you to one of their older commercials available for viewing on YouTube. See below.

There are plenty more where that came from. These guys are brilliant, and it’s exactly the dry/awkward humor that Flight of the Conchords has led me to expect of anything from New Zealand.

The drink itself, on the other hand, is actually pretty straight forward. As a contrast to our regular lemon flavored beverages in the US, L&P has what I would describe as a “lemon bitters” flavor. The soda is fairly dry and leaves a mineral-like aftertaste in your mouth (there’s an ingredient called “mineral salts” on the label). It’s not at all unpleasant. In fact, it’s a very clean and refreshing drink, and I wish it was easier to find. There are few drinks that find the right balance of sweetness and acidity, but I feel like L&P has nailed that concept. Combine that with the brilliant marketing and I give this soda a 7.5 out of 10. 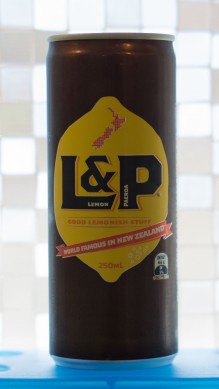 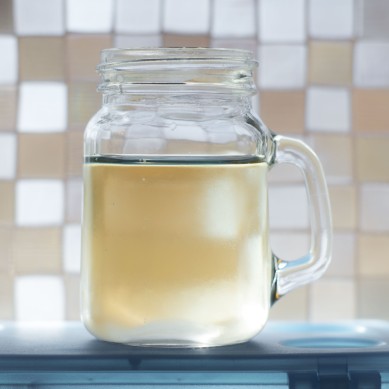 The can was so small (about 8.5 ounces) that I finished it very quickly with a couple other volunteer tasters. They had similar observations. One thing that I thought could enhance it is a fresh thin slice of lemon. Maybe next time.

If you’re ever in New Zealand, give it a try. Also, see if you can find a chocolate bar that’s flavored with L&P. It’s incredible! It’s white chocolate, but they infuse it with the same sort of lemon bitters that are in the drink. Should you find some, please bring me back 10.

Wikipedia also tells me that it’s available in the UK and Australia.

Catalog:
The bottle was gifted to me by a friend, but it was sampled and reviewed on 9/10/2016