I have fond memories of these fries. At one point in time I considered them revolutionary. Life-changing, even. Much like my purple-dyed hair, those days are behind me.

I attended a Mariners game recently and had some great food! These fries were the exception. When I arrived at the Ivar’s on the first base side of the stadium it was just after the seventh inning stretch and there was virtually no line whatsoever. While that seemed like an advantage at the time it was actually a warning sign. 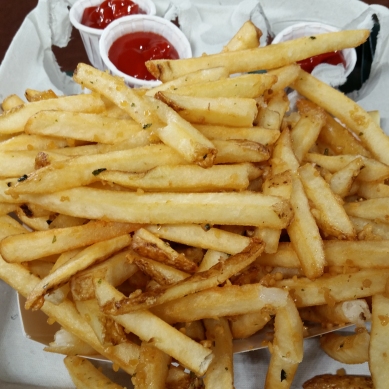 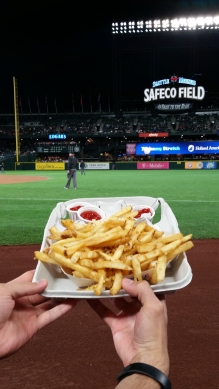 There were only a couple of problems with these fries, but those problems were critical. Number 1, they weren’t fried long enough. You can tell by how pale they are that someone pulled the basket from the fryer a bit too early. Problem two, they sat underneath a warming light for way too long. It doesn’t take long before fries are ruined under those keep lights. Problem three, the apple slices provided were brown and sad. Problem four, the fries were actually under-seasoned. It was pretty disappointing trying to get down wilty, starchy, under-salted fries with a bit of minced garlic and parsley.

Like I said, I have fond memories of these fries, so either they used to be better or I’m much more picky than I used to be. I’m not saying don’t order them, but INSIST that you get fresh fries. You’re paying a premium and you deserve a quality product. 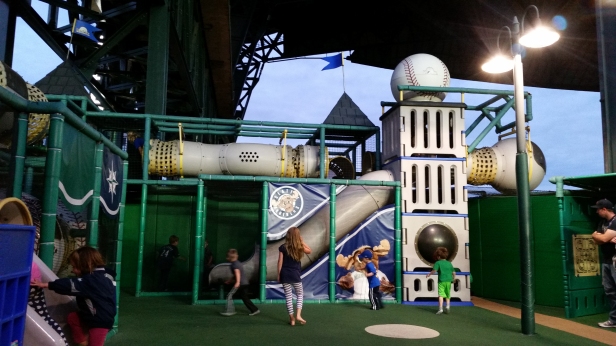 I whole-heartedly recommend visiting Safeco Field to catch a Mariners game. I was with my six year-old who had a blast on the playground in center field, and I’ve enjoyed every game I’ve seen there. Terrific stadium. The food I enjoyed and would endorse are the Cantina Nachos (I found them on the first base side, but they’re also located in the Terrace Club (up by right field). Delicious stuff. Another favorite was the cheddar jalapeno sausage with grilled onions and banana peppers. Hemplers makes a good sausage.

These fries came in at a 5.5 out of 10, and that’s being a little bit kind. I probably should have gone back and asked for a remake, but it’s a hastle getting in and out of your seat. Make sure they get it right before you leave.

Also, you may have noticed that I abandoned the varying rating scale for fries. Everything is out of 10 now. A 7 out of 10 is still really good for a plain french fry and shouldn’t be considered deficient, it just doesn’t get the experience points of a true poutine or other variation.