If these malted beverages taste anything like beer, I believe I’ve found a new reason to not drink beer. They’re disgusting. All of them in their own unique way.One of them was borderline drinkable. Another was almost borderline drinkable. The other two were unpleasant. However, out of duty to my faithful readers I pushed on and heartily sampled all four varieties of malted barley soda. I had two assistants with me for this 4 way test which proved very valuable. Between the three of us we only made it through about half the volume of soda.

We didn’t take video of our first impressions of Malta, but Lucille Ball gives an adequate portrayal in this old I Love Lucy clip:

If you’re like me (about two days ago), you’re probably wondering what Malta is. It’s a drink made from malted barley (dried sprouted barley) that’s brewed but not fermented. The end result is something probably like beer, but non-alcoholic. It’s popular around the world, but predominantly in the Caribbean. I lived in Honduras for two years and don’t remember seeing it, but I also wasn’t seeking it out. I found four different brands in the Mexican Grocery in Pike Place Market. 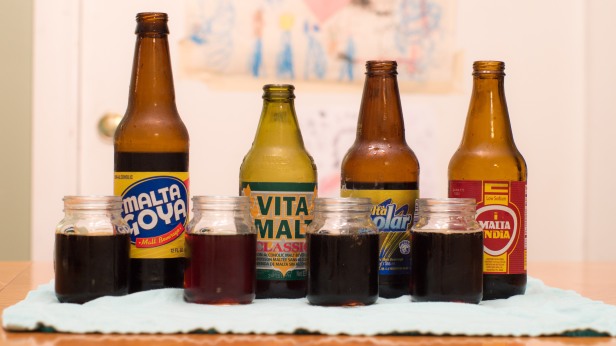 Let’s review these from worst to best.

Vitamalt was horrific. It’s also a pretty known brand around the world, so my sheltered taste buds must be missing something. For me, the drink was sour, not very sweet, kind of salty, and produced a visceral rejection when placed in the mouth. One of my assistants, Andrew Jorgensen, described it as “licking the carpet of a hippy van” and that he “regretted smelling it first. I’d have to agree, although it did have the coolest bottle. 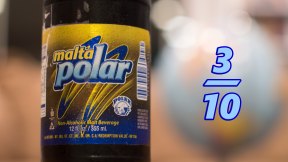 Malta Polar was less horrific, but still bad in its own way. The problems I had before still exist…it’s sour with a real funk to it from the hops. However, this one is less intense than Vitamalt so was a touch more palatable. The color was extremely dark, and the drink felt thick in your mouth. I wonder if they use more of the malted barley than other brands? It could almost pass as a really bad cola. This version is brewed in Florida and is also known as Maltín Polar. 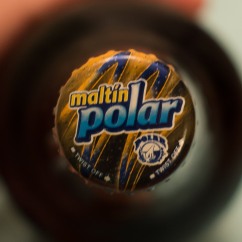 Malta Goya looked a little familiar to me, but maybe it just reminded me of Chocolate Yoohoo. Their website says that it’s the #1 Malta brand in the US, and I wouldn’t doubt it. I also think that it’s a low bar. I have literally never seen anyone else drink Malta in my life. Compared to the others, this wasn’t too sweet, had an interesting deep red color, tasted a lot like molasses, and had a bit of funk to it. Once again, probably from the hops. They all have hops. Malta Goya did have a bit more carbonation than the others. Looking at the ingredients, I believe it was the only one that used high fructose corn syrup. It also used regular corn syrup. It was thick. Additionally, it incorporated two different malts (pale malt and caramel malt). If push came to shove I could finish a bottle of it. 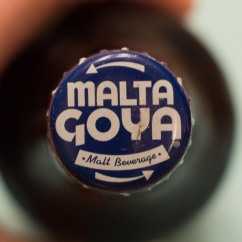 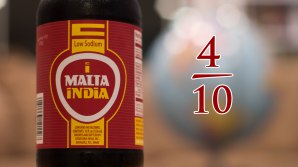 Malta India was surprisingly not atrocious. I’d even say it was a rounded and balanced drink compared to some of the others. Is it because of the corn grits and rice? I don’t know, but none of the others had that on the ingredients list. There was a bit of nuance to it that was somewhat enjoyable. The sweetness wasn’t overwhelming, and between the three of us we finished the bottle. This brand comes to use from the island of Puerto Rico. Couldn’t find much of a web presence, but you’ll probably find this at your local Latin grocery. 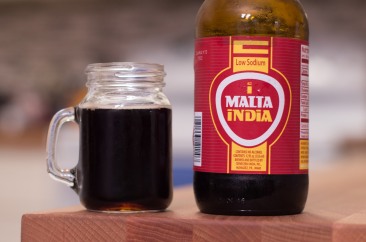 Thanks for sticking through this review with me. It was an interesting experience that I would prefer to not repeat. If you really like funky beverages with a lot of body (and body odor) then go ahead and give one of these brands a try. You might love it.

Acting on a tip from the internet I added condensed milk to a couple of the brands…It didn’t help. I also mixed them all together as a Malta graveyard. It also didn’t help. Still gross. Please consume this stuff at your own risk, but keep in mind one thing. The internet says that it’s good for you.