IRN-BRU came to me highly recommended. In the first place, it’s a soda. In the second place, it’s Scottish. Of the weird hobbies I have, curling is the one that aligns me with the history of Scotland. Not only is this soda from Scotland, it’s as synonymous with Scotland pride as anything else you’ll find. NPR agrees. In the third place, the company has brilliantly quirky advertising that speaks to me. Take a gander below:

These guys are my kind of weird. Keep in mind that they outsell Coca-Cola in Scotland. That’s no simple feat.

With the amount of praise I’d heard going into this review I had some high expectations. This drink needed to change my life, and it needed to happen pretty much instantly. I found a couple bottles in my local Rocket Fizz ($3.99 for the 16.9 ounce bottle) and made some observations. Number one, this stuff is very orange. Number two, ferric ammonium citrate is an ingredient (and I thought the whole “iron” part was a marketing ploy). Number three, this was a lot of money for a small bottle of soda. It had better be good. 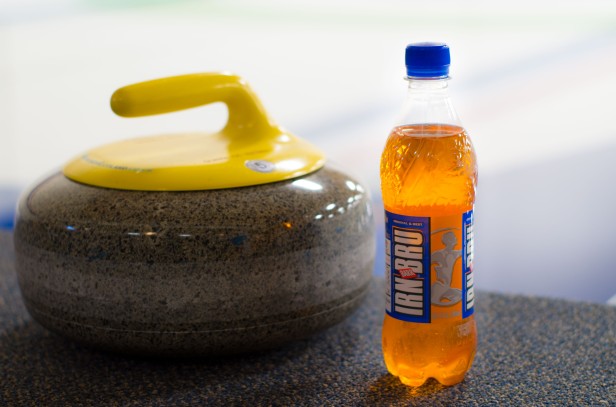 I brought the bottle by my local curling rink so that it wouldn’t feel so homesick. I conducted the actual taste test at home with a true Scot present as a witness. Her expectations were high and I was worried that our friendship would be destroyed if I showed any sign of disappointment. 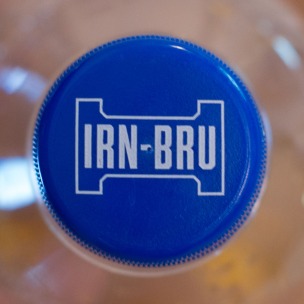 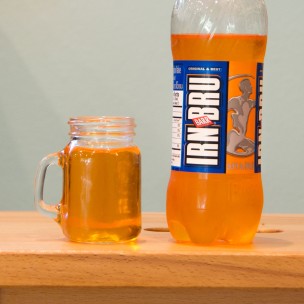 My first impression of the BRU was “wow, this is really sweet”. I’d equate it to eating cotton candy and bubble gum at the same time, but only after dipping the two in a bit of Tang. To my surprise there was a sort of iron aftertaste…almost like they use leftover rusty girders from WWII to stir the vats of syrups. They just might.

So, did I like it? Yeah, but I didn’t feel any more Scottish than I did before drinking it. That was a bit of a let down. I kept drinking until the bottle was empty and suddenly…it happened! The change was subtle, but I’ve provided some before and after pictures. You might be able to pinpoint the difference.

Thank goodness we were taking so many photos of me watering that hanging basket without a shirt on! Otherwise we would have missed the moment of transformation! I felt invincible. I felt ageless. I felt itchy, so I shaved off the beard and went to work on my exercises. My daughter knew that my BRU fueled body needed extra resistance. What you’re seeing below is a live camera feed. I’m not sure when the effects will wear off, but until then I’ll continue the push-ups (Go Hawks!).

Prior to sampling IRN-BRU I reached out to some experts in the field of Scottish culture at the American-Scottish Foundation. This is what they had to say:

“Wherever you find a Scottish community around the world, you’ll find IRN-BRU,”

“With its refreshing but hard-to-describe flavor and fun neon color, it has well earned its reputation as Scotland’s ‘other national drink’.”

They believed that the effects of IRN-BRU would be more subtle than my expectations, and that I should supplement the BRU with haggis and/or fried Mars bars for a true Scot transformation. That proved unnecessary.

Ultimately, I award IRN-BRU a 7 out of 10 on my soda rating scale. While the taste was not groundbreaking in and of itself, the mental and physical enhancements the BRU provides elevated the score.

To be completely honest, I didn’t love the flavor. I think true Scots are bred to love the stuff, but I’m not even close to Scottish. I found it drinkable, but really sweet. And strange. Were it not for my fear of the Scottish community I might have given it a 5.

One thought on “IRN-BRU (Scotland)”