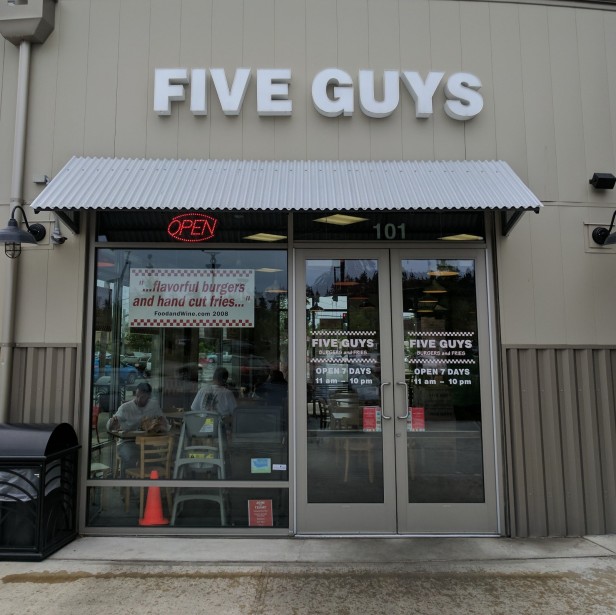 I’m not an expert of Five Guys Burgers and Fries. I just took a courtesy look at their website and discovered that they’ve been around since 1986. They began franchising back in 2003 and within the past 15 years have grown to 1,500 active locations with another 1,500 in development. That’s pretty staggering. The concept is simple…they sell fresh beef hamburgers with your choice of toppings and fresh cut fries cooked in peanut oil. 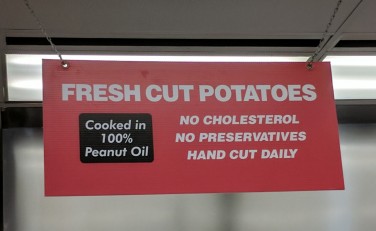 Here’s the thing, I don’t enjoy going to Five Guys because I’m intimidated by their ordering process. The draw is supposed to be choosing all the toppings you want for your burger, but I can’t handle that kind of pressure. I need a list of 6 to 10 options combinations with the ability to modify them. That’s why pizza places all offer the same boring options. People need direction. The next thing you’re going to tell me is that there really aren’t a whole lot of exciting options to choose from and that I should just be a grown up and order what I like. That’s probably true. 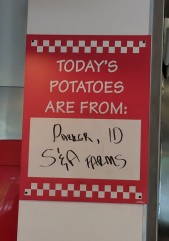 There’s a gimmick with the fries as well. Gimmicks, actually. The first is a commitment to displaying the provider of their current supply of potatoes. You get the name of the farm and the city they came from. I like that. I doubt that it has any impact on the flavor of the potatoes but it’s a dramatic departure from the McDonald’s corporate kitchen provider system most of fast food uses. The second gimmick is the brown sack they serve the fries in. They pour the fries in a cup (depending on size), then pour some more fries in the sack. You end up with a grease stained bag to convince everyone around you that you’re a slob.

Tough words, right? Well, the fries are good. I got the regular version, not the cajun seasoned. I measured the fries at about 9mm, just above medium thick. Given the peanut oil cooking method I expected the fries to have a good solid crust, but they were either slightly under-cooked or they steamed a bit in the bag. Most likely under-cooked. I heard a rumor that you can request them to be cooked a bit extra or a bit less according to preference, but I didn’t know that at the time of ordering. So, mine were a bit soft, and also a bit under-seasoned. I ate every single one of them.

These are not bad fries, but they’re also not what I’d consider revolutionary. They beat most fast food fries, and you get a lot more for your dollar, so you could certainly do worse. This is a pretty clear 6 out of 10 on my rating scale, but I’m thinking that the cajun seasoning might elevate it a bit along with a bit more cook time in the fryer.

Would love to hear your thoughts.