There’s a lot going on in the name of this beverage. It’s produced by the Atlantic Brewing Company (based out of Bar Harbor, Maine), and the “Old Soaker” comes from the name of a small island near the brewery. Cool stuff. How was the soda? Nice!

I wasn’t quite sure how this one was going to go. It certainly looked like a high quality soda (no artificial sweeteners, made with real fruit juice, etc.), but I’ve had things flavored with blueberry before that were far too medicinal. My prediction was that this would end up tasting kind of like a pomegranate juice. In reality, it tasted much more like a reduced sugar grape juice.

That disappointed me at first, and I thought I might be losing my marbles. Upon a closer reading of the label I discovered that it contains BOTH grape juice and blueberry juice in the ingredients. This feels like false advertising…the bottle says “blueberry soda”, but I forgive them. I’m willing to bet that it’s mostly grape soda with some blueberry. Even so, the soda was nice as it was. An easy 7.5 out of 10. 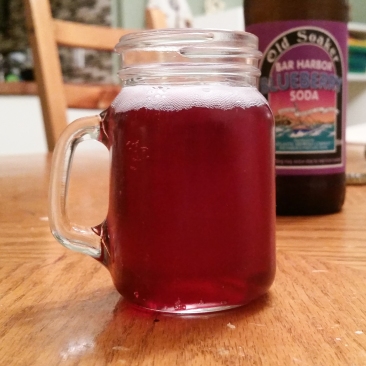 It’s not too tart, it’s not too sweet, and it has a enough carbonation. It’s not to the extreme of a “sparkler”. This is something I would definitely come back to if I was in the mood for a natural tasting fruit soda. I discovered that they also brew a root beer, so I’ll be on the lookout for it.

Catalog:
Purchased at the Root Beer Store in Lynnwood, sampled on 8/14/2016

Disclaimer:
My wife didn’t like it. She said it tasted too much like cough syrup. I disagree.