I acknowledge that this review is a stretch to the boundaries of this blog’s content. These are not technically a fry, but these chips are made from potatoes AND are flavored like a variety of french fries. That counts.

Canada is a funny place. They’ve had strange flavors of chips in Canada for as long as I remember, and only recently have those exotic flavors started to migrate down to the US. Bacon Poutine appears new and was a first for me. Granted, it’s been a while since I’ve visited the Great White North (how’s it going, eh?), but this chip is somewhat revolutionary. It crosses potato flavor lines and explores a brave new world of possibility. Also, they look completely unappetizing.

I opened the bag and took a big whiff of the poutine perfume. It was a fine bouquet of salt, cheesey funk, and smoke. Checking the ingredients I discovered that it contains “specially selected potatoes”, “corn maltodextrin”, “mozzarrella cheese”, and “natural flavour”. Among other things. So, the ingredients confirm the smell. Of special note, there is no bacon in the ingredients list. These chips might actually be vegetarian. Regardless, I settled in for the taste test.

Actually, my cat beat me to it. I dropped one of the chips while pouring them into the container and Morrie was all over that bad boy. His review…good enough for about 10 licks, a half bite, but that was it. Not entirely damning, but I wasn’t encouraged.

When I took my first bite the first thing I noticed was the BBQ-like smokiness. It wasn’t as sweet as American BBQ chips, but the smoke definitely came through. That must be what they consider bacon flavor (flavour). What’s interesting is that the bacon shown on the package isn’t even Canadian bacon, it’s the American version of bacon. Take a closer look:

The smoke flavor wasn’t bad, and it blended right into a malted cheese sort of flavor. To me it just tasted malty/yeasty, but my wife said it tasted like cheese. I believe her. The flavor combination was pretty enjoyable and I ended up eating a small handful of the chips. My wife finished the bag and she HATES most of the weird food I bring home. While this isn’t something I would go out of my way to get, I liked it. It’s a pretty good chip. Not a great poutine, but it’s not exactly apples to apples, now is it?

A 6 out of 10 seems fair to me, whatever that rating may mean to you.

Catalog:
Purchased at some random convenience store in Victoria, BC on 8/27/2016 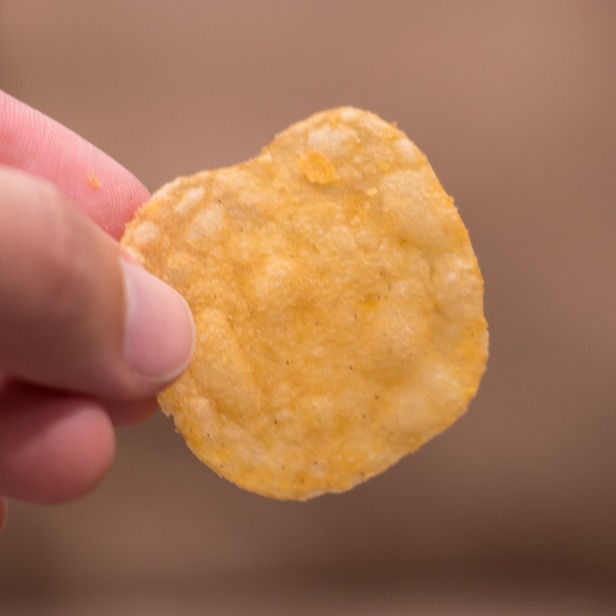