I graduated from Western Washington University with a degree in accounting. That being the case, I spent a lot of time in the town of Bellingham but for a couple of reasons I never made it to Aslan Brewing during my tenure as a student. The first reason was that as a non-drinker I didn’t spend a lot of time in breweries. The second reason was that the brewery opened after I moved back to Seattle. That last one is a pretty good excuse.

Aslan fits perfectly into my mental image of what Bellingham is. They focus on organic ingredients, their beers have clever names and creative seasonal variants, and the decor is artsy, but restrained (think canning jars for water glasses). Bellingham truly is the City of Subdued Excitement.

The owners of Aslan were kind enough to host me and provide samples of their house brewed root beer and ginger beer,

as well as their waffle fry poutine. After I saw some of the other items on their menu I couldn’t help but order more (rockfish tacos and Zook Fries, plus a kids meal for my companions). I’m telling you that so you’ll think I’ve retained a shred of journalistic integrity…I’ve heard some of you express doubts. Once again, I’m doing this for science. Your criticism has been noted and disregarded.

Let’s start off with the root beer. I love it when breweries make their own root beer, especially when they’re brave enough to brew it from scratch without a root beer extract.

Root beer is a difficult drink to master because consumers hold so much expectation of what a root beer should be. When you deviate from that foundation people get confused. Aslan deviates from that foundation, but I think they do it successfully. Their root beer has a strong presence of sarsaparilla and birch bark which steers the drink into some earthy notes. Imagine a bold herbal tea and you’re getting close. There are layers of spice, a nice level of carbonation, and vanilla. I enjoyed it, but I enjoy complex root beers. People that are strongly in the “I love A&W and things with a lot of vanilla” camp might not appreciate it. This root beer is at home in a brewery. A solid 8 (see my rating scale here).

The ginger beer was a different beast; as it should be. It’s a bit more straight forward, using fresh ginger, lemon, lime, and cane sugar.

The drink had a pleasant ginger burn that wasn’t overpowering, the citrus added enough acid to keep things in balance, and the soda stayed on the dry side. Those are all things that I like. I gave it a 8.1 because I preferred it a little bit over the root beer. It was a bit smoother to drink, a bit more approachable, but truly…they were both very good. One minor criticism of both drinks; they were served with ice. Yeah, ice’ll keep your drink cold, but it also dilutes it. If you’re spending $4 for a glass of craft soda you don’t want it getting watered down. Also, I wouldn’t be against a garnish of some sort. A slice of lime for the ginger beer, for example.

I gave these a 9 because the waffle fries were cooked to perfection and seasoned with precision. They were a little bit spicy on their own which played well with the uber creamy mushroom gravy.

It was aromatic, it tasted indulgent, and I thought it was a creative and delicious take on poutine. I would eat these again in a heartbeat. Small criticism, they could have used a bit more cheese curds. Or, at the very least, larger pieces of cheese curd. The gravy will always be the star of the show, so maybe they had the right idea by holding back, but Beechers makes a good curd…I wanted more.

The Zook fries were zucchini fries with an interesting dipping sauce. 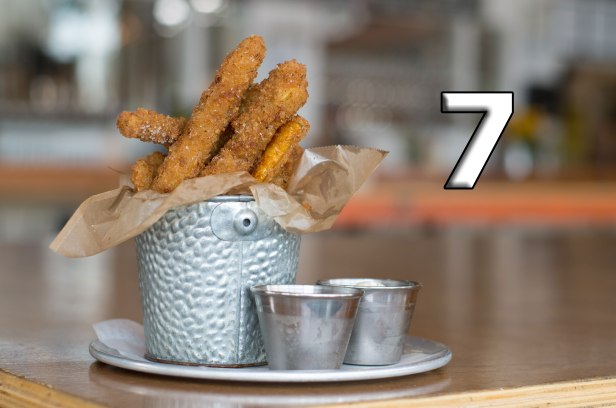 I gave these a 7 for a couple of reasons, and one of those reasons is not because I had to pay for them out of my own money. Zucchini is a very wet vegetable, so when frying it you need a pretty thick batter that’ll hold up to the moisture inside as well as the oil on the outside.

Aslan did that well, but you’re always going to end up with a lot of breading which in turn holds a lot of grease. I was happy to share these with the table but probably couldn’t finish an order on my own. They were fried well, and they were seasoned well, but they’re better as a shareable rather than an individual appetizer. Also, the garlic dip was awesome, the teriyaki seemed a bit off with the zucchini. Oh well, there was plenty of garlic sauce to get me through.

All in all, I loved my trip to Aslan. Definitely get the waffle fry poutine. They’re the kind of dish that inspire sonnets. If you’re not planning on trying one of their beers, grab a root beer or ginger beer. They even have a non-alcoholic beer if you’re into that flavor but just can’t have the alcohol. Thank you, Aslan, for hosting me.