The only reasonable thing to do after riding an electric submarine 130 feet below the ocean’s surface is to eat french fries. Oh wait, did I mention that I rode a submarine 130 feet below the ocean’s surface? Because I did that. It was rad. For someone who has no immediate plans to learn how to scuba dive, Atlantis Submarines are a fun way to get a glimpse into the underwater world.

However, I don’t review submarines, I review french fries, sodas, and occasionally bidets (no joke). After our submarine tour we gathered the troops back in downtown Lahaina and cozied into a patio table at Down the Hatch. It wasn’t a particularly busy day in Lahaina, and I stopped by the restaurant at 11:00am, but I was really drawn in by the palpable “chill” vibe in the air. Down the Hatch is attached to an open air courtyard with tropical plants, a fish pond, and a talented dude jamming on a ukulele. He even looped a bass track so he could cover Beat It by Michael Jackson. Good stuff. 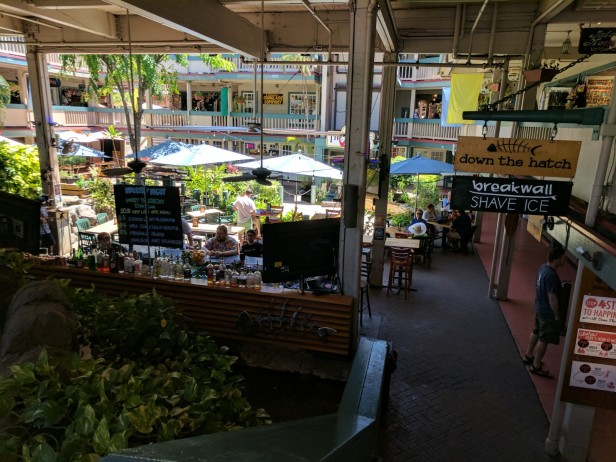 I ordered the Mermaid Fries which, if taken literally, would be somewhat off-putting. Would mermaid be fishy? Probably. I’ve had fish on fries before and it was delicious, but these guys were just being cute with the name. It’s actually shoestring fries (not matchstick, but thinner than McDonald’s), cheese, bacon, ranch, lava lava sauce, and truffle cheese (not shown on the online menu).

There were some surprises when the fries arrived. Number one, the fries were seasoned with some sort of cajun spice blend. I dug it. Probably some cayenne, paprika, white pepper…great stuff. Number two, the cheese was actually some sort of cheddar cheese sauce. Maybe that’s the truffle cheese? Not gonna complain about that, I love me some runny cheese. Number three, they added chopped green onions. Those were all good surprises. 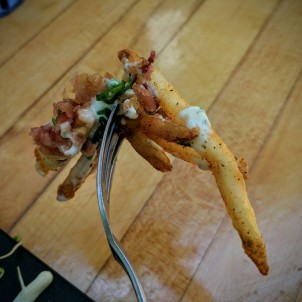 Now for my observations. The fries themselves were cooked tremendously well. The cashier/hostess/waitress told me that she had the kitchen fry them a little extra because that’s how she prefers them. That’s how they should always be done. They were crispy enough that I wondered if they had a light batter. The seasoning played very well on the thin fries and added a little heat with the salt. 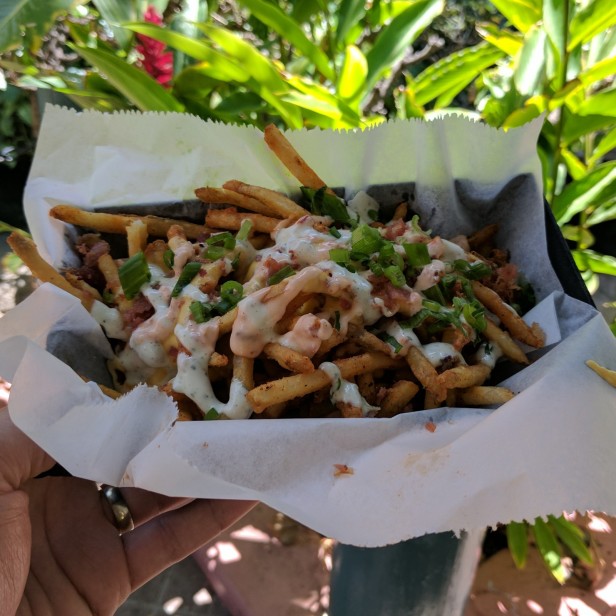 I also thought that the three sauces were a great combination. Cheddar cheese sauce with ranch is a creamy dream, and the lava lava sauce (some sort of spicy aioli) echoed the heat from the seasoning salt. Bacon goes with everything, so there’s no point in even mentioning that the bacon was good. Incredibly, the fries held up to the onslaught of sauces until the last bite.

I went to town on these fries. They really hit the spot. I also ordered their Ahi Samurai appetizer which had seared ahi, avocado hummus, sprouts, balsamic glaze and pickled red onion on a crostini. That was incredible. The ahi appetizer was $15 and worth every penny. The Mermaid Fries were $7.50 and worth at least $7.75.

Down the Hatch get my seal of approval. I’m going to give them an 8.5 out of 10 on my rating scale which is pretty freaking high. They were pretty freaking good. If you want to see other reviews of stuff I tried while visiting Maui, go ahead and click here. As of right now I’ve only posted one other review of a Maui thing and it was also an 8.5. Maybe the sun and the surf lead the mind to a positive domain?

Anyway, if you’re visiting Maui, especially Lahaina, Down the Hatch is worth your time.