This is one of a four part series of reviews for the Ramblin’ brand. Click here the see the whole series. I feel like I gave a good history of the brand in my “Ramblin’ Root Beer” post, so click here if you want to see their origin story.  Their “Ramblin’ Rose Cream Soda” is the most outside-the-box flavor out of the four, and it’s probably my favorite.

While the three root beer flavors were bitter or overpowering in some way, the rose cream soda was fairly balanced and smooth. Rose is a hard flavor to describe. I’ve had rose candy before, and this had the same subtle aromatic quality. The vanilla “cream” flavor combined well with the rose. I still don’t think I’m a rose guy, though. The perfume-like soda made me feel a bit like a grandma. Obviously I have nothing against grandma’s, I’m just not at that point in my life yet.

I’m willing to give this a 7 out of 10 on my rating scale. I wouldn’t mind drinking it again, but it’s an interesting change from more traditional flavors. Monarch Beverage did well with this one, although I’m not sure how it fits the Ramblin’ brand. That decision is well above my pay grade. Considering that I’m paid in samples of soda in exchange for reviews that’s not saying a whole lot. 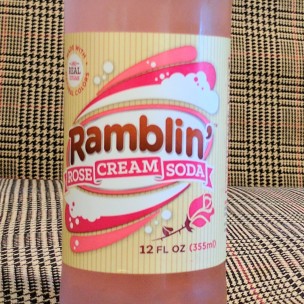 One weird thing to note, there’s real fruit juice in the soda, but it’s apparently added for color…not for flavor. Kind of strange.

Catalog:
Sampled in July 2017. Received complimentary from Monarch Beverage in exchange for an honest review.