For those that are impatient, the recipe is at the bottom of the page.

The name in the title is somewhat deceiving. Galanga (kha) is one ingredient in my recipe, but ginger, lemon grass, kaffir lime leaves, and fresh lime juice are all just as important to the overall flavor. I was inspired by a soda I had at a local upscale Vietnamese restaurant, but the flavors are probably familiar to anyone who has had Tom Kha Gai soup at a Thai restaurant. I didn’t go so far as to add chicken, or mushrooms, but the basic idea is there. Here’s a look at ginger and galanga side by side:

Galanga and ginger are similar to each other, but they’re different enough that by using both you get an interesting layering of flavor. I chewed on both of them raw and found the ginger to be more pleasantly spicy whereas the galanga was more earthy…and spicy. It’s almost woody. One thing is for sure, it’s harder to cut down than ginger. I did the best I could to remove the outer skin/bark from both 1/2 pound pieces, chopped them up, and boiled them in about 6 cups of water. 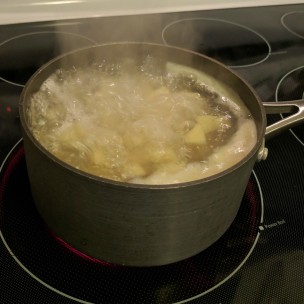 I boiled it for about an hour or so. It had reduced substantially. Then I just let it steep until the water had cooled, then I threw everything into a blender broke the chunks down into smaller pieces.

At the end of that the concoction fit into a really big mason jar. I was tired, it was late, so I put it in the refrigerator and came back to it the next day. At this point I strained out the ginger/galanga and used my manly hands to squeeze out for extra juice. A more sensible person would probably just use a juicer.

At this point I had about 4 cups of liquid. I added two stalks of chunked lemongrass and boiled it down to about 3 cups.

It took about 30-40 minutes to reduce the liquid down to that 3 cup level (approximately), and by that point I thought enough lemongrass flavor had infused itself into the brew. I strained out the lemongrass, reduced the fluid just a little bit more, then measured. I was at about 2.5 cups at this point and decided that I had reached the concentration I needed. How did I know? I sampled it periodically and gauged how intense the ginger heat was. It should be almost intolerable.

Here’s where my science breaks down. To make your syrup you should add about as much sugar as you have liquid. Since I had about 2.5 cups of liquid, I figured I should add about 2.5 cups of sugar, but I prefer my ginger drinks to be a bit strong, so I only added about 2 cups. It’s entirely a personal preference. You can always add more simple syrup later if it’s not sweet enough, but it’s harder to add more flavor.

I added the sugar under medium high heat and stirred until it was dissolved. I let it just about come to a boil, then I took it off the heat, let it cool down for a while, and transferred the liquid to a smaller mason jar.

Once the syrup cooled down I added a couple small handfuls of kaffir limes leaves to infuse some bright citrus notes. Kaffir lime and lemongrass play an interesting citrus balance kind of like lemon/lime…it’s just different. I don’t remember if the lime leaves can handle heat so I decided not to chance it. Honestly, it probably would have been fine. Regardless, I added a bit of lime juice to the syrup as well to help preserve it (about a tablespoon or two) then let it sit in the refrigerator for a couple days.

Now you’re ready to drink it! I generally start with a 1 part syrup, 3 parts seltzer water mixture. This syrup ended up needing about a 1 to 4 ratio, but it’s always a bit different depending on the strength of the syrup and personal preference. I use a sodastream for my carbonated water, but you could just use club soda. For this small glass it was approximately 3 tablespoons of syrup and then water. Don’t be tempted to mix the syrup with still water and then carbonate it with the sodastream…bad things happen. Messy things.

Don’t forget this last part. Squeeze some fresh lime juice into the soda and gently stir everything together. Voila! I figured out a cool use for my leftover lemongrass. You can separate a layer of lemongrass which creates a hollow tube. This is a perfect straw for your soda!

In summary, things you need:

I’d guess this makes about a gallon of soda. I don’t know. I could do the math, but it’s late, and I probably wont’ remember to come back. This soda is not very economical or easy, but I think it’s delicious and refreshing. I’ll bet there’s a way to scale it, especially if you employ a juicer. Also, I’m almost positive it would make an incredible shrub (vinegar based soda), I just don’t know how to do it. Let me know if you have any tips or tricks that work for you.