These fries always seem to make it into the local media’s lists of must-try french fries in the city. The Butcher’s Table is an upscale meat-focused restaurant in the heart of Amazon country, and their fries are incredibly unique. I’ve had a lot of fries over the past year and the only thing that I’ve seen close to this was served at Saveur in Victoria, BC. However, they were only served on their brunch menu. Why? Because they were actually hash browns.

To avoid confusion, I liked these fries. Having said that, I don’t think that they’re fries. I dissected one of the rectangular parallelepipeds and discovered that they were formed out of grated potatoes into the desired shape, coated lightly in some sort of breading (flour, corn meal, I don’t know), and then fried. This is similar to a tater tot, or a McDonald’s hash brown, but much more elegant.

These cuboids are fried in beef fat, artfully plated, garnished with scallions, and served with a house made sriracha sauce. For $12 it wasn’t unreasonably expensive, but it’s priced for the neighborhood. I saw plates of fries at a couple other tables during my lunch visit, but I was the only weirdo ordering that as my lunch. Everyone else purchased them as an appetizer for the table.

The fries were perfectly crispy on the outside, nicely seasoned, and had a heartiness that I can only attribute to the beef tallow they were cooked in. Since the inside of the sticks was made from grated potatoes there was a fair amount of fat penetration which made them heavy, and possibly a long-term health risk. The sriracha sauce had enough heat to lighten them up, but I honestly could have quit after two fries instead of eating the whole plate of eight. More to the point, I ran out of sriracha sauce while I still had about 3/4 of a fry left. Had they provided me with an extra tablespoon or two of sauce it would have been perfect. Or, heaven forbid I ask someone for more. I just ate it plain to avoid feeling any more awkward than I already did (I was eating french fries for lunch, by myself).

So, the fries were good, but ultimately I need to focus my rating on my desire to eat them again. I appreciate the technical execution, and I also like the restaurant team (same people behind the Maximus Minimus food truck and Beecher’s Cheese), but as a french fry I’m going to settle for 7.7 out of 10. That’s pretty high on my rating scale. I don’t think they satisfy a craving for french fries, but they’re one of the best hash browns I’ve ever had. 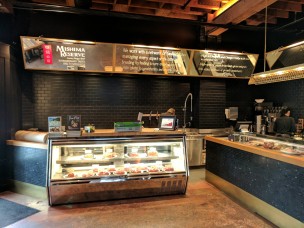