Ladies and Gentlemen…for your viewing pleasure we have an all out cage match between three glass bottle bargain sodas! Step right up, step right up! These sodas are scrappy, saturated, and ready to rumble! Even better, they were cheap, cheap, CHEAP! 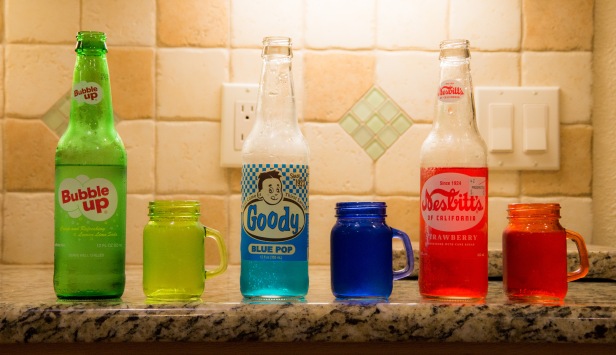 In corner one, we have Bubble Up. Bubble Up has an interesting backstory that predates 7-Up by a full 10 years. Ownership of the brand has passed hands many times over the years but currently belongs to the Dad’s Root Beer Company (Hedinger Brands).

This bottle of Bubble Up was produced by the good folks at Orca Beverage in Mukilteo, Washington. Just like most lemon-lime sodas you’ve had before, this one tastes like lemon. And lime. And sugar. Lots of sugar. While a bit syrupy for my tastes, it was respectable soda. I appreciated the strong lime presence. It’s alright.

In corner two, we have Goody Blue Pop. There’s scattered information about Goody Blue Pop on the internet, but nothing concrete. It’s an old brand, and once again it’s bottled by the folks at Orca Beverage.

colored sodas that I’ve reviewed recently. It comes across as extremely sweet. It’s intended to be a blue raspberry sort of beverage, but given that there’s no such thing as a blue raspberry it makes sense that it ends up tasting like bubble gum flavored cotton candy. I don’t like it. It’s a cavity in a bottle.

Finally, in corner three…wait…can you have three corners? Shouldn’t there be four? I guess this is a triangle cage match. Anyway, we have Nesbitt’s Strawberry Soda.

Once again we have an old brand of soda with a complicated ownership history. From what I gathered on Wikipedia, the Big Red people currently hold the brand, but they license it to other independent bottlers. I believe that this particular bottle came from the Orca Beverage people. Not a lot of nuance here, but it’s a decent strawberry soda. It’s not dramatically different than what you’ll find in the generic aisle of your local grocery store, but it’s made with cane sugar (as are the other two). It’s sweet, but not nearly as overwhelming as the Blue Pop. It’s alright.

As far as cheap sodas go, these weren’t bad. They were all made with cane sugar, they all came in pretty glass bottles, and the only one that I’d completely avoid in the future was the Blue Pop. If I were to rate the sodas, I’d give Bubble Up a 5.5, Good Blue Pop a 5, and Nesbitt’s Strawberry Soda a 5.8.

I don’t consider these to be gourmet sodas, I’d call them nostalgia sodas. They’re fun in their own way, but they lack the nuance and complexity of fancier beverages that I review. That being said, I bought the first two sodas for about 80 cents at my local Albertson’s grocery store. I picked up the Nesbitt’s for 69 cents at a super sketchy liquidator shop in Everett, Washington.

For good measure, I mixed them all together. It wasn’t great, but I lived to write another review.

Catalog:
Sampled on 10/16/2016, purchased at Albertsons for 80 cents (Goody and Bubble Up), 69 cents for Nesbitt at Prospector Liquidation in Everett, Washington