I actually meant to review this burger the week before Thanksgiving but I had the flu. Then a sinus infection. Then some stomach issues related to my antibiotics. It was a bad time but the dust has settled and I’m moving on.

You’ll remember my previous visits to 8oz Burger & Co as positive experiences. The short rib poutine and the sweet potato tots were both excellent dishes. I don’t ordinarily review burgers, but they created a seasonal special that aligned with my focus. The turkey poutine burger.

A thick turkey patty, cranberry relish, cheese curds, Kennebec fries, turkey gravy, duck egg and fried sage leaves. Get out of town! At $16 a la carte it wasn’t an economical choice, but it was an easy one. 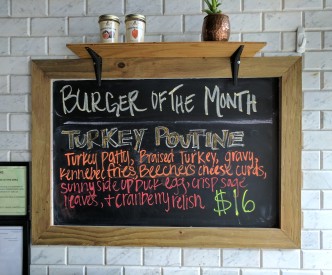 Let’s start off with the positives. There were a lot of fantastic flavors in this burger. The duck egg was perfectly cooked with one of the most beautiful runny yokes I’ve ever seen. Seriously, check this out. It’s like a fountain of yoke.

I also loved the cranberry relish. It was spiced, but the clove didn’t overpower the punchy cranberries. It’s a classic flavor pairing and it hasn’t gone out of style. The turkey gravy and the fries were also nice, but the fries were more of a novelty while the gravy and melted cheese curds added an oozy-goopy mess to the plate (in a good way). That’s why God created hamburger buns. They were a perfect conduit for soaking up the disaster left on my plate. 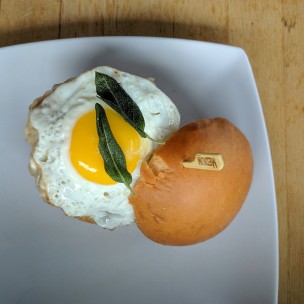 Before you go thinking that everything is rainbows and unicorns, I want to point out one problem that I had with the burger. While it might just be a one-off execution error I’d have to say that the turkey was dry. Not just a little, but substantially dry. They achieved a beautiful crust on the patty and seasoned it well, but ground turkey is extremely unforgiving and I’m willing to bet that the carry-over heat from the grill took it too far while they were preparing my friend’s dish.

Due to the crust on the patty the other wet ingredients couldn’t penetrate through. I ended up with lots of gooey sauce but very dry bites. It was strange. A lot of the toppings fell off the burger and pooled on the plate. I enjoyed eating the last third of my burger mashed up into a sort of stuffing with my fork. I considered sending it back, but I was on a lunch hour (and I didn’t want to be a princess). They probably would have remade it without hesitation. You can tell how lasting my disappointment with the burger was by this last picture: 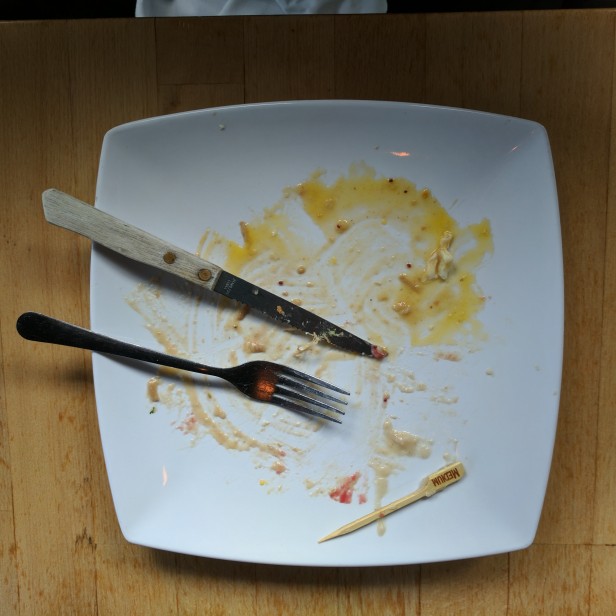 In conclusion, the patty was dry, but the toppings were awesome. I could see the dish getting reworked into a very successful Thanksgiving poutine all on its own (roasted turkey instead of ground), but as it is I can’t give it more than 7 out of 10. I’d give some of the other burgers 8’s or 9’s easily, but I don’t review burgers unless they have a french fry twist.