Be it known that this post arrives on the eve of America’s annual celebration of pie…Thanksgiving. I heard a rumor about football and pilgrims or something, but it’s obvious that pie holds court. Thanksgiving is a competition to see who can eat the most turkey/potatoes/stuffing and still have room for five slices of pie.

Are you missing most of your teeth and can no longer chew your pie? Are you on a liquid only diet due to a traumatic orthognathic surgery? You’re in luck! Rocket Fizz sells a line of sodas that are flavored as your favorite (and least favorite) holiday desserts! I thought that some were more successful than others, so I’ll list them in order of my preference; best to worst.

Probably the biggest surprise of my taste test. While I predicted that this soda would be sticky and generic, it turned out to be light, bright, and refreshing. The key lime flavor came through cleanly over a fresh cream body. By fresh cream I mean whipped cream, very different than the pure vanilla of a regular cream soda. The soda is sweet…as most are…but I didn’t find it too sweet. 8 out of 10.

This cherry based soda drinks a little sweeter than others, but it succeeds by not crossing into cough syrup territory. The cherry flavor stays bright, and the cream flavor is the same whipped cream taste as the others in the product line. I dug it, but not quite as much as the Key Lime. It’s worth trying, and certainly worth a 7.1 out of 10. 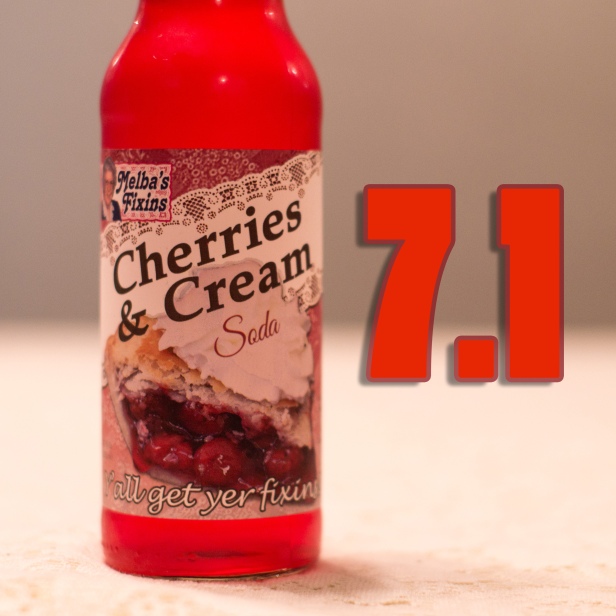 Imagine the Key Lime Pie soda that I described above. Now imagine that soda with a candied lemon instead of key lime. It’s good, but it’s not quite as interesting. The flavor is actually fairly subdued. I like it, and I like enough for a 7 out of 10.

I think that this did have a reasonable peach flavor, but someone tasting this soda with me thought that it tasted like a candy necklace. Once they said that all I could taste was candy necklace. Candy necklaces are good. This is also good. Without the persuasive comment I might have just thought it was a subtle peach. Either way, a 6.7 out of 10 seems reasonable.

Apparently Melba doesn’t handle the pumpkin pies in the Melba/Lester household. It’s time to tell the truth, I am not wild about pumpkin pie. There’s an emotional attachment to it, sure, but as far as pies go it’s a bit underwhelming. I felt the same about this soda. If my score was solely on tasting like a reasonable pumpkin pie I might give it an 8 out of 10, but I’m rating it based on my personal enjoyment of the soda. I could taste the body of pumpkin pie filling with some finishing notes of clove. Then more clove. And then you wonder how much clove is in other pumpkin pies you’ve had. I was okay with it, but not wild about it. A  6.5 out of 10.

I’m worried about Melba. This is kind of like when grandma is up too late baking the desserts for Thanksgiving and starts getting sloppy. Everyone’s too polite to tell Melba that maybe she should just buy one or two of the pies next year. The poor thing mixed up her teaspoons with tablespoons and overdid it on the cinnamon. I found the Apple Pie soda to be a bit bitter. Beyond that it was similar to an apple turnover from one of your favorite fast food restaurants. It’s not terrible, but I would not drink it again. A 5.5 out of 10.

No, this isn’t a pie, but it’s in the same product line and I had it available. I kind of wish I didn’t. There was a distinct and bitter burnt taste to this soda that I found undesirable. The problem may be that it tasted a bit too much like coffee cake. It certainly had the cinnamon, yeast, and glaze flavors I associate with coffee cake but this is one of those foods that I enjoy eating but not drinking. A 5 out of 10.

I reviewed these before, but here’s a link.

Some of these were really good, some of these were clever and made sense in the line, but not great on their own. I’d like to give a big thank you to Indian Wells Brewing in California for providing the product, and Rocket Fizz for selling it across the US. Happy holidays!