I’m writing this review from my death bed. Full disclosure, it’s just my normal bed, but I’m feeling sick enough to begin writing my own eulogy. My head is pretty foggy, so parts of the narrative might come together weird. Bear with me.

I sampled this ginger beer a couple of days ago and have been pondering the right up for a while. I’ve probably tried Cock’n Bull Ginger Beer 4 or 5 different times over the past year but I was never in a position to take photos and do the full write up. During a recent trip to Cost Plus World Market I found a variety pack of Cock’n Bull containing the regular ginger beer as well as some bitters flavored sodas.

As a matter of history, Cock’n Bull was most likely America’s first ginger beer, as well as the genesis of the Moscow Mule (ginger beer, vodka, lime juice, copper mug). More about that story here. While there are plenty of gourmet ginger beers on the market now, Cock’n Bull is still the brand that you’ll find for mixed drinks in bars. I believe there are two reasons for that. Number one, it’s pretty widely accessible. There are a few different bottlers licensed to produce the beverage around the country (mine was bottled by Orca Beverage in Mukilteo, Washington). Number two, it’s a really good ginger beer. 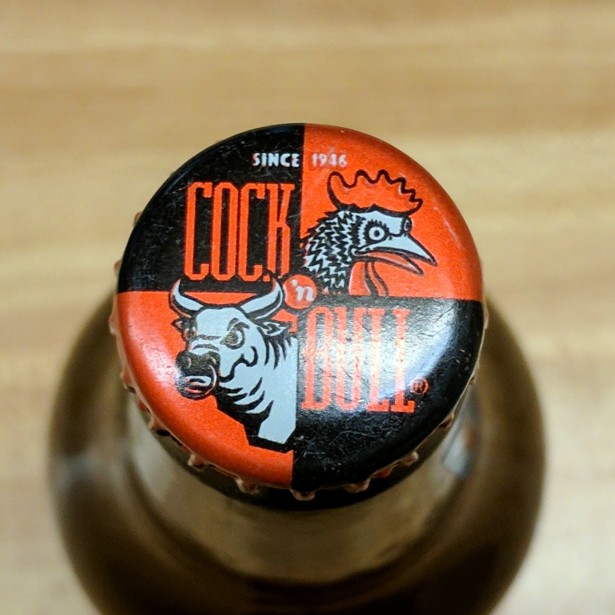 For me, the flavor comes in two parts. You get an initial ginger/sugar hit that tastes a lot like a ginger candy. It feels a little spicy, but the natural sugar mellows the initial burn which then settles into a slightly acidic and clean finish. However, you’re not finished. There’s an afterburner that kicks in once the sparkling acidity leaves your palate. The ginger burns your tonsils for a few seconds to remind you who’s boss. Since the flavors are so clean and bold I can see this mixing well with lots of other things. I’ve enjoyed it on its own, but it could certainly be the base for other more complex beverages.

I’ve made ginger beer on my own before, and I think they achieve the layers of heat by using both a traditional ginger mash and then adding ginger powder as well. I could be wrong. Regardless, it’s a great beverage and I give it a 7.7 out of 10 on my rating scale.

To see reviews of other sodas from Orca Beverage, click here.

To see reviews of other Cock’n Bull beverages (when I get around to it), click here.