About a year ago a friend and I were chatting about sodas. We tried a lot of weird flavors together (see these blind reviews), and he confided to me that he always wanted to try a butter flavored soda. It’s certainly an unconventional idea, but butter’s delicious. Why not? 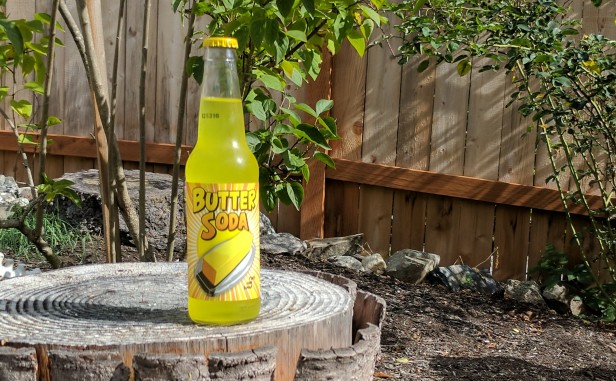 I have a contact or two within the Rocket Fizz family so I reached out to see if this was a flavor they’ve considered. Sure enough, they had! At the time it was still a few months out from bottling, but they eventually sent me a sample to try. That was several months ago…it’s been a really busy summer. And spring. Sigh. Excuses aside, here I am reviewing the long awaited butter soda. 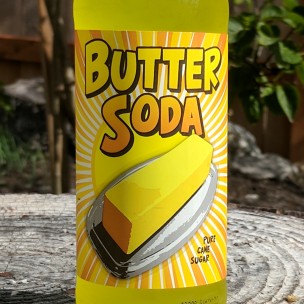 Butter soda is odd. It’s also polarizing. I let some friends family sample it as well and there were some who vehemently despised it, while others were more measured in their responses. No one liked it, though. The most complimentary thing that people said was that it kind of tasted a bit like buttered popcorn jelly belly’s. The worst thing that people said was that it tasted like detergent. Your experience may vary.

I didn’t find it very buttery. For me it tasted like movie theater butter pumped into a can of club soda with a lot of sugar. It didn’t taste like natural butter. There was no real creaminess, but there was a hint of salt. So, I’d say it’s more like a sweetened vegetable oil soda. That’s probably not exactly right, but it gives you an idea of what to expect. 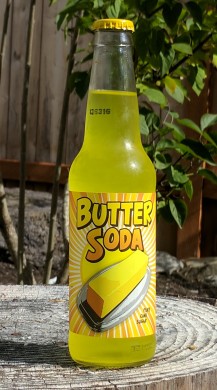 I also tried a Sweet Corn Soda in the same sitting. You can see that review here. I made a cocktail of about 1 part Butter Soda, 2 parts Sweet Corn Soda and found that the corn greatly improves the butter. The opposite was not true. By itself the Butter Soda is a 5 out of 10 on my rating scale. Mixed with the Sweet Corn I might go up to 6.3.

To see reviews of other Rocket Fizz sodas, click here. Those aren’t all Rocket Fizz brand, but you can purchase them at your local Rocket Fizz location (check here to track one down near you). Mine is in Seattle on Broadway.