On the advice of a root beer blogger, I took a slight detour on a drive home from Oregon. There’s a restaurant in Olympia called Iron Rabbit. Just as the Sirens called Odysseus off his path, Iron Rabbit’s poutine, root beer, and ginger ale called me off mine.

Iron Rabbit struck me as a hip but not trendy restaurant concept. When you look at the menu it’s obvious that they’re striving to serve interesting (inspired) food. It all seems approachable for a family, but the quality and creativity is significantly above the chain restaurants in the area. The loosely hung Christmas lights reminded me a bit of Stranger Things, but that’s another story.

A poutine inspired by Cordon Bleu? Sign me up. I was smitten with this dish from the description alone, let alone the impeccable execution. The fries themselves were terrific. The crinkle cut Jojo (wedge) style fries were nicely seasoned with a house blend of salt and spices, fried to a crispy crust, and held up well to the cream sauce. 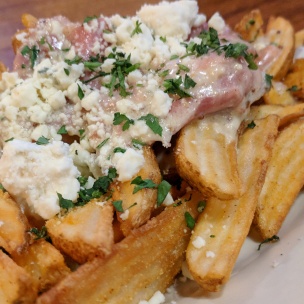 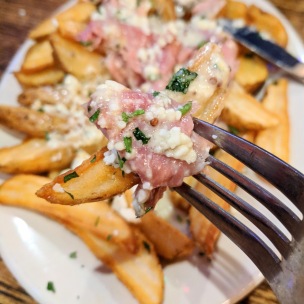 Now, about that cream sauce. This was a great alternative to a traditional poutine gravy. Gorgonzola, cream, prosciutto, and stone ground mustard all combine into a rich, satisfying, and slightly tangy sauce. It was outstanding. The fresh herbs also helped brighten the dish. In case you haven’t gathered, I really liked this poutine. It’s a 9 out of 10 for me on the rating scale.

This is actually what brought me to Iron Rabbit. I love finding restaurants/bars that make their own root beer. I’ve found that the results are mixed, but I appreciate the effort regardless. This was one of the better house root beers that I’ve had.

The root beer is smooth. Maybe too smooth. However, I felt they had the right balance of sweetness with cane sugar and honey. I thought I tasted some wintergreen and possibly even clove. Regardless, there was a little bit of spice to the body, but I wanted a bit more bite. As is this would be a family friendly root beer that both kids and adults would enjoy. They served it with ice…strange…but they also provided free refills. The carbonation was a touch light, but I’m still willing to give this an  8 out of 10. Nice job, Iron Rabbit. 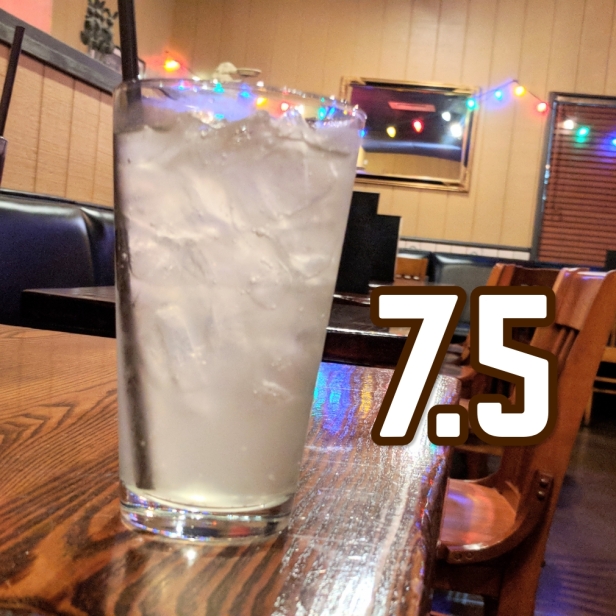 This is like extra credit. Finding a restaurant that does poutine and root beer is hard enough, but Iron Rabbit makes their own ginger ale as well! Ginger ale is a bit more straight forward than root beer, but they did a nice job.

Actually, this ginger ale tastes very similar to my home made ginger ale. My method is to boil and steep fresh ginger, reduce the liquid by about half, then boil again to integrate sugar to complete the syrup. I mix one part syrup to about 4 parts sparkling water. This gives you a clean and bright ginger flavor. There wasn’t a lot of heat in the Iron Rabbit ginger ale, but it was refreshing. The one thing that they’re missing (and I always add) is some fresh lime juice. As it was served to me I’d give it a 7.5 out of 10, but it could be an 8 with some fresh citrus.

I’m glad I found Iron Rabbit. Communities need restaurants like this that they can visit for quality “inspired” food. These guys care about what they’re doing, and my meal was a reflection of that.