Goooooooooooooooo Giants! I’ve been spending a lot of time in the bay area of California. If not physically, then mentally. I work for the coolest B2B software company in the world which means that we have employees in San Francisco and San Jose. We’re stretched across several other states as well, but when I travel to meet with the team it’s almost always to the bay.

I’ll admit to making a mistake right off the bat (get it?). There were lots of fries to choose from, and I chose wrong. There were sweet potato fries, garlic fries, and regular fries, and Irish nachos. Someone else was getting fish and chips at the Irish pub/stand, so I grabbed an order of the Irish nachos. This is a dish designed to insult people from both Ireland and Mexico alike.

Murph’s Clubhouse Pub tried to do right with this dish, and it could have been good. However, their combination of fries, chili, cheese, onion, and jalapeno fell short of my standards for quality loaded fries. Number one, the fries weren’t crispy. They’re a variant of steak fries at 9mm thick, but they’re not fried long enough, or hot enough, to really develop a crust. You’re left with a pretty generic starchy base with little character. Number two, the chili was boring. If this wasn’t straight from a can then I’ll eat my hat. And the hat will be more interesting. To be fair, canned chili isn’t disgusting, but it’s not note-worthy. Number three, there was very little cheese, and it wasn’t melted. It was factory shredded cheddar. This leads me to point number four. THEY’RE NOT NACHOS. THEY’RE ALSO NOT IRISH. 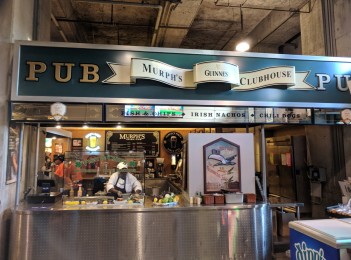 Is everything with potatoes suddenly Irish? If it was actually Irish I figure it should be a baked potato rather than steak fries. Anyway, the bigger point is that these aren’t nachos. They’re chili cheese fries. My expectation of ballpark nachos is that they have cheese sauce, not shredded cheese. Beyond that, they should have taco meat and/or beans, but definitely not chili. The jalapenos get you a little bit of credit, but not much. You have to at least melt the cheese to come anywhere close to a technical nacho variant.

At about $10 you skip these. The garlic fries looked a lot tastier. I ended up chasing this down with a sliced brisket sandwich with a creamy horseradish sauce. That was awesome. AT&T is a beautiful ballpark full of great food. Don’t waste your time on these Irish nachos. They only earn a 4 out of 10 on my rating scale.