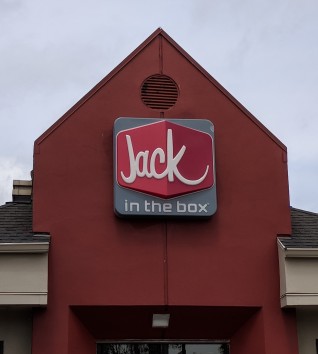 Loaded fries at fast food restaurants rarely turn out well. The problem starts with the fries not being crispy enough from the get-go, then you’re adding wet toppings on top. If you’re taking it home then the heat is going to create condensation in the container and ultimately you’re left with a soggy sack of savory starch.

The Cholula fries from Jack in the Box didn’t attempt to solve this problem, I believe they embraced the fact that people like hot sauce and cheese and fries and will probably pay a little extra to eat them together. At least once. It worked on me, and I’ll be it worked on plenty of other people as well.

To their credit, the pepperjack cheese sauce was really tasty. I’m willing to bet that there’s bonafide cheese in there, but the mixture of other oils and stabilizers keep it in a consistent “sauce” form. It’s a little spicy, very creamy, and it’s enhanced by a sporadic application of Cholula hot sauce. The fries themselves were garbage, but used as a vehicle to eat the cheese and hot sauce mixture they served their purpose well.

I like Cholula. Probably more than Tapatio. So, of course I was a fan of getting a few dabs of it on my fries. I also tried the Cholula Buttery Jack burger which, despite the awkwardly gigantic piece of lettuce was pretty tasty as well. It was dry, but a splash of hot sauce and the crispy fried jalapeno slices made it better than a lot of fast food burgers. I’m not going to rate the burger, but the fries were a 5 out of 10 on my rating scale. I enjoyed the sauce, but I need to be honest about the dish overall. It was in no way a breakthrough for Jack in the Box. Do I need to mention that the pictures weren’t really close to the real presentation? 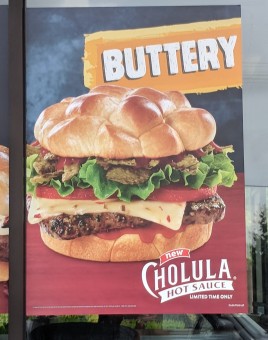 I have no clue how long these fries will be on the market, so if you’re curious you can get some for about $3. Or you could give that money to a kid running a lemonade stand. You’ll feel better about yourself with the lemonade. 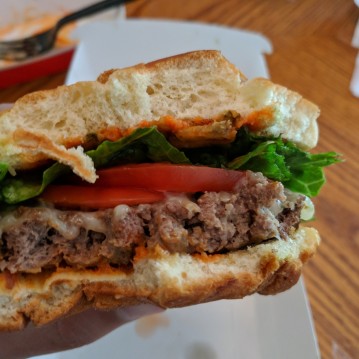