I’m a big Seattle sports fan, and I had the opportunity to watch my Sounders play a match this past Wednesday night at CenturyLink field. Seattle is blessed with (mostly) excellent food in its stadiums, and given the fact that I had seats in the club level I was excited for something unique. Last year I had an order to fries with crab meat on top…unfortunately those had been discontinued. My option this time around was truffle fries at Seastar by John Howie. John Howie is well known and respected in Seattle, so his name carries clout.

Full disclosure, I didn’t want to order these. Truffle fries have come under scrutiny recently because the “truffle” oil they’re generally tossed in is somewhat suspect. It’s not always derived from actual truffles, or the truffle oil is so diluted it becomes more of a marketing gimmick than anything else. I can’t speak to whether this truffle oil was genuine, or even quality. It had a strong aroma of what I’d expect from something “truffle”, but that’s my only evidence. My biggest issue before ordering was that these were $11.50 compared to $5 for the regular fries. I’m cheap, and these were not. 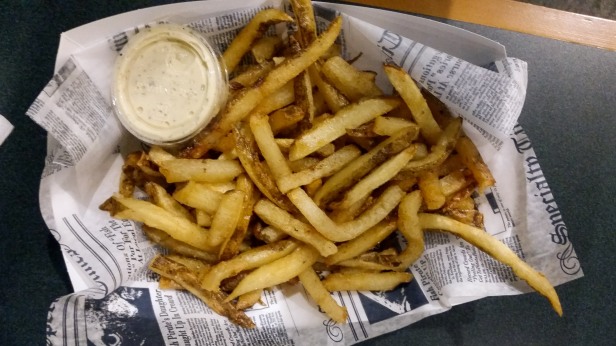 The portion was pretty generous. Definitely shareable between two people. It came with a small cup of dipping sauce (almost omitted from my order) which I believe was a garlic aioli. There could have been a little bit of horseradish, not sure. What I am sure about was how salty the fries were. It was a little extreme, but still edible. More troublesome was the oil sheen covering each individual fry.

I was disappointed with what I received, especially given the stadium mark-up in price. However, I was starving and this was my option for dinner. I continued to eat. And eat. When I was about halfway through it became apparent that a significant amount of this large basket of fries was actually overcooked odds and ends that had sat in the fryer for a cycle or two too long. These bits were fried to the point that many were nothing more than hollow shells saturated in grease. This is when I stopped.

I liked the aioli. The fries were certainly edible, but the burnt pieces weren’t very enjoyable. I have to believe that if John Howie was served this, or if anyone at any of his restaurants was served this, he wouldn’t stand for it. A sports stadium shouldn’t be any different, especially in the club level. Call me elitist, but I feel like I’m being generous with a 5 out of 10. They could have been less greasy. They could have been more careful with the remnants. They could have added some Parmesan cheese or fresh herbs. But, they didn’t.

By the way, the Sounders also earned a 5 out of 10 for that match. They only managed a scoreless draw against the worst team in the Western conference. A win would have secured a playoff berth. Even worse, a key player got ejected with a completely avoidable red card. Don’t get me started.