What a revelation! Time and time again I’ve come across internet posts of people bemoaning Seattle’s lack of proper carne asada fries. I found carne asada fries last week at a local Mexican restaurant (review here), but that was a poor first experience. Frankly, it had me doubt the viability of carne asada fries as a dish. As if the universe was self-correcting, a recommendation came my way directing me to a classy sports bar/restaurant called Quality Athletics. 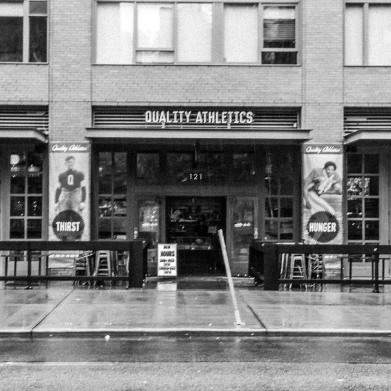 Quality Athletics is located right in the stadium district of Pioneer Square in Seattle. The sports bar theme makes sense, but they did it upscale. Nice. It’s been packed when I’ve walked by prior to Sounders/Seahawks/Mariners games, but on a rainy Tuesday in October it was wide open for an awkward photographer to have lunch and snap some photos.

The fries are listed on their menu as an appetizer, or a shareable, but I found no shame in making a meal of it. Even if I had had an assistant with me I would have been reluctant to share. It smelled incredible, it looked incredible, and my first bite of the perfectly seared steak made me a believer. These guys are for real.

There are a lot of things going on in this dish. First of all, the carne asada isn’t your typical skirt steak. They source grass-fed beef from a farm in Oregon and use thinly sliced New York strip for the carne asada. As if that wasn’t enough, they marinate it for 3 days before it’s grilled. The result is incredibly tender, flavor-packed and rich beef. The portion is about enough to make a decent burrito. You’ll love it.

While the beef is the star, the other components earn honorable mentions. The pico de gallo (“pepper” de gallo) was very clever. Due to tomatoes being out of season the chef used red and green bell peppers in a very fine dice with jalapeño and white onion. I’m stealing that idea for home use. The guacamole was creamy and fresh. The habañero salsa provided enough heat to warm the palate. I worried that it would be too juicy for the dish, but they strained it enough. The cilantro, sour cream,  and sharp cheddar were all portioned well. Throughout the dish I tasted a lot of lime in the components. Everything was bright and addictive.

Getting everything together in one bite was a challenge, but I realized quickly that it was more interesting combining a few elements at a time. It gave me different flavor combinations as I ate and everything went together beautifully.

If I had to come up with one criticism of the dish, it would be the french fries themselves. Don’t misunderstand my point, they were good! They’re seasoned with salt and pepper and were prepared well. However, I think I would have preferred something a bit thicker cut and fried to a harder crust. These were relatively skinny and were slightly overwhelmed by the culinary miracle on top of them. You can tell from the picture below how upset I was about this.

These earned every bit of the 9 out of 10 I gave them, which is VERY high on my rating scale. Carne asada fries are redeemed, but these will be the gold standard I judge anything else by.