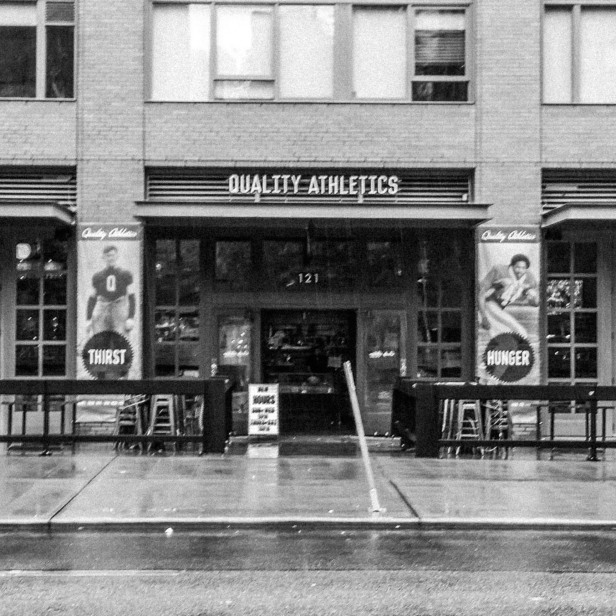 I obsess over a couple of things in my life. Fries are one of those things, and al pastor tacos are another. Obviously I have the blog dedicated to fries, but I’ve kept my al pastor obsession fairly private. Those worlds collide today as I review one of the newest fry creations by Daniel Cox at Quality Athletics.

Chef Cox is a super talented guy, and he’s given Quality Athletics an enviable reputation for upscale sport-bar dining. It’s the sports bar you take people to who are too cool for sports bars. The decor is very mid-century athletic club chic, and the food reflects the best of what gastro-pubs try to offer. Think chicken and waffles, but with a cheddar-habanero waffle and smoked maple syrup. There’s a creative tweak to classic bar food, and then there’s some other thoughtful shareable plates. Check out the menu here.

This isn’t my first trip to Quality Athletics. The carne asada fries previously on the menu made a strong first impression, and the korean inspired loaded waffle fries were an incredible follow-up. Chef Cox let me know that he had a couple new things going on that I might be interested in so I took a bus into the city and therapy ate my way through an awesome lunch. My first course was the Loaded Al Pastor Fries.

It was hard to get over how beautiful this dish was. The splashes of purple, yellow, green, and red contrasted with the white cheese and sour cream were striking. I found myself foraging around for the perfectly caramelized slices of sizzling pork and then pairing them with the refreshingly cold and caramelized pineapple. The flavors were so bright and complimentary, and the textures and temperatures really played off of each other. Something else that grabbed my attention was how creamy the sour cream and cotija tasted. They both seemed to coat your mouth a bit more than standard dairy, and it turns out that he sources them from a high-end farm for that exact purpose. Well worth it.

I should probably review the fries as well as the toppings. The fries were good! Were they able to stay perfectly crisp throughout the duration of my meal? No, but it didn’t seem to matter. They had enough structural integrity to hold their shape and get incorporated into my forkfuls of everything else. They were also well seasoned and tasty on their own. If I had a choice between having all these toppings over fries or chips I might lean towards chips, but you can’t go wrong either way.

All this being said, my rating lands at a stunning 9 out of 10 on my rating scale. I could have gone higher, but for full disclosure, this meal was on the house and I don’t want a perception of that biasing my review.

I’d like to give some more context to my fixation on Al Pastor. For starters, it’s one of the more flavorful meat choices at any taco truck. It’s pork with a pineapple/guajillo based marinade, but if you’re doing it authentically then there’s a presentation element as well. It’s traditionally cooked by stacking thin strips of the marinated pork on a vertical spit with a pineapple on top. As the edges caramelize they’re thinly sliced away, placed on a fresh corn tortilla, and served with a small slice of the roasted pineapple. This tradition comes from Lebanese immigrants arriving in Mexico and applying their shawarma cooking techniques to the local ingredients. How cool is that? It’s hard to find anyone using the vertical rotisseries in the Seattle area, but it’s very common in Mexico and southern US.