I’ve been pretty brutal to the novelty soda offerings from Rocket Fizz. I don’t take any of it back. Their Dirt Soda is a nightmare. The Peanut Butter Soda was unsettling. Even with those experiences behind me I came back to drink from the same well. There’s something inside me that begs for punishment.

Did I expect great things to come from this review? Of course not. Guess what? I actually kind of liked it! In my mind this was going to be identical to my Dirt Soda review…just green instead of brown. I was shocked (shocked I say!) to discover that this comes across as a legitimately drinkable soda.

Don’t misunderstand me, I will probably never drink this again, but rather than a supersaturated novelty disgusting flavor this came across as a pleasantly sweetened generically “herby” soda. I’d guess that wheatgrass was the inspiration. After chewing on a bit of raw wheatgrass I could taste the similarities, but at first it reminded me a bit of basil. Overal, it’s very drinkable, but for sure not a flavor that I’m going to pursue in the future. A  4.5 out of 10 in this instance doesn’t quite fit with my current rating scale, but it’s the only thing that made sense to me. 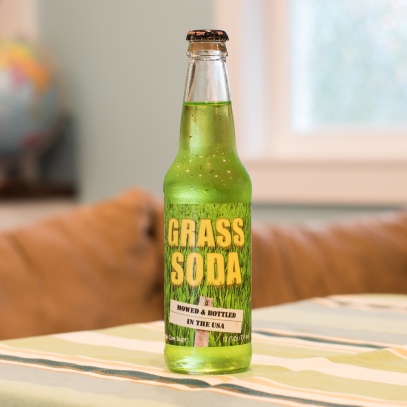 I decided to take this review one step further and see if I could make a better grass soda. I filmed the whole thing (not in great quality), but I’m sure you’ve had a worse waste of four minutes of your life at some point. Check it out:

This was pretty fun. While I love sampling legitimately good sodas, the novelty flavors at Rocket Fizz really speak to me. I’ll be doing more reviews like this in the future, hopefully with better video and audio quality.

My carbonated wheatgrass beverage is on the right. The Rocket Fizz Grass Soda is on the left.

Catalog:
I purchased my Grass Soda at Rocket Fizz on Capitol Hill in Seattle and sampled it on 10/1/2016.